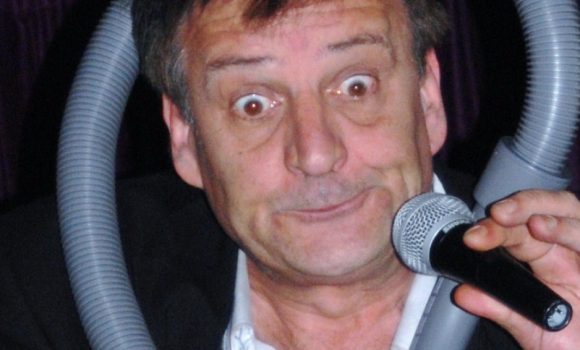 Master of mayhem, prop lunatic Wes Zaharuk, takes audience on a joy-ride of frenzy machine-gun anarchic physical comedy routines and maniac physical audience interaction. He is a one-man tour de force, known to combine routines with power tools, bananas and film noir. You could call him plain daft, others have compared him to Tommy Cooper on acid but his award-winning eccentric collection of eye-popping prop tricks have earned Wes Zaharuk a world-wide reputation for a tornado-like approach to comedy. Wes is easily one of the most exciting acts on the comedy circuit.

Canadian Wes appeared across the USA and Canada before basing himself in the UK. As well as North America, he’s brought his eccentric collection of prop tricks to (amongst other countries) USA, Canada, Singapore, Australia, Switzerland, Germany, Cyprus, Spain and Denmark. He’s also done a lot of corporate events in both Europe and North America, mainly for clients looking for that ‘something different’ from your standard stand-up set. His award-winning prop-based routine has played various comedy festivals around the world.

Wes Zaharuk credits his comic roots to his parents. They made ‘not listening’ an Olympic event. As a child, his parents dressed him in wool pants that were incredibly itchy. Complain as he would, his words fell on deaf ears. When he developed a skin condition that looked like a large, all-dressed pizza, he was tested for allergies. It was found that he was allergic to wool. Through it all, Wes developed his desire to be heard — if only to reduce rash.

About the use of props, such as vacuums, whips, and blowers, in his performance Wes quips ‘Show business sometimes lures people who didn’t get enough love early in life. I feel as a child I didn’t get enough unsupervised time with power tools but who has perfect parents?’

A rib-tickling dive into the surreal.
Channel 4