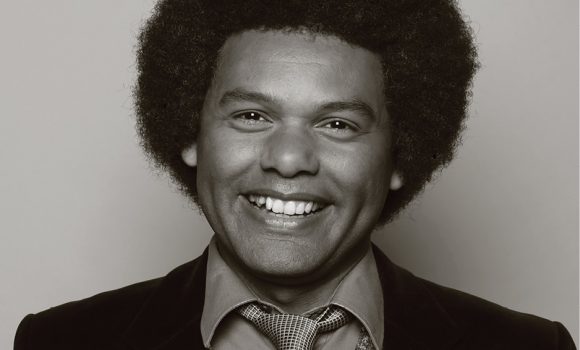 Andy White is An energetic, confident and silly Brummie who combines silly voices and a mad afro to devastating comic effect. Andy has numerous media appearances, including the BBC New Comedy Awards on BBC Choice, Brand Spanking New on BBC Radio 7 and his winning performance on the Weakest Link comedian’s special! His appearance on the BBC quiz show featured in his five star (* * * * * Three Weeks) Edinburgh show, ‘It Started With A Quiz’ in 2007. This followed on from his well-received one man show at the 2005 Leicester Comedy Festival: Young, Gifted and Beige.

Had me exercising my pelvic floor muscles to avoid an accident
Karen Slater, BBC Tees

Andy escaped from a call centre to become a stand up comic who mixes silly voices and faces with observational humour, topical humour and his mixed race background. He can do material that’s clever, cheeky, sick or just silly and his performance can shift from deadpan to loud and physical. Andy has played to a wide variety of audiences, adults and children, both at home and abroad, in comedy clubs, theatres, universities, radio and TV shows, and at corporate entertainment events. He regularly headlines up and down the UK and has worked with all the major chains and comedy promoters along the way. Overseas, he’s performed in Monte Carlo (Laughing Horse), Berlin (Bleu Montag), Abu Dhabi and Dubai (Laughter House) amongst others.

The laughs turned to applause many times for Andy
Suzanne Worthington, BBC Cumbria